XML is not what it's cracked up to be as a data exchange format. It's over-engineered, over-complicated, and comes with a whole lot of baggage that's just not healthy. Take the formal extended BNF from the W3C website. This doesn't even cover the semantics, just the syntax:

Writing parsers for the full specification is daunting and error-prone. Most of the time, we only want to parse snippets of XML such as:

JSON has a much simpler schema and is usually described using wonderfully-intuitive "railroad" diagrams. There is a website that provides nice railroad diagrams of various W3C specifications, but these just highlight the inelegance of the specs.

It turns out that, if you're willing to forgo some XML features like DTD validation, automatic parameter-entity substitution and others, the syntax is really not too bad:

I've simplified the specification somewhat without (hopefully) loosening the constraints too much. Most XML parsers have to be quite lenient anyway, mainly because it's such hard work conforming to the standard. In particular, the <!DOCTYPE> tag is treated as a lump that can potentially be broken down elsewhere, if needs be.

I munged the EBNF a bit more, plugged it into the online railroad tool and generated some diagrams: 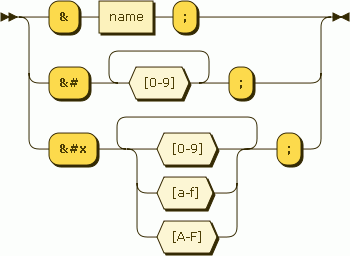 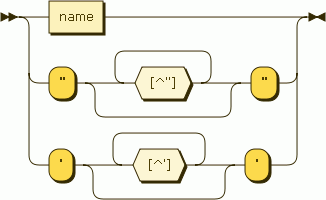